Leaving is one of my paintings that will be in the exhibit. 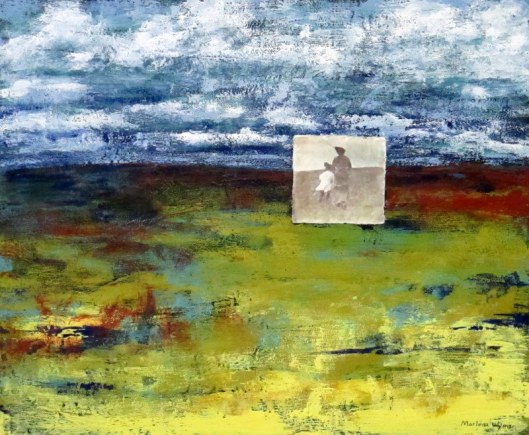 Leaving was inspired by quotes from Mary Lees Inderwick’s diary 1885, and Catharine Neil’s and Margaret May Shaw (Frank)’s memoirs of neighbor women, 1900 – 1905, as described in Nanci L. Langford’s thesis.

After seducing Mary on the promise of marriage, Charles continued his relations with other women and left the family for long periods after their eventual marriage. I am always watching and waiting for him and always being disappointed… I wish myself disposed of…I am less than no one here. Although women had no legal rights to their children or their land at that time, she left to raise her sons alone. (Inderwick, 1885)

The Mountie came to the farm and warned him about abusing his wife. She showed us the marks left by the whip. (Neil, 1900)

They were continually having family rows…one day after beating his wife one more time, V. did not get away with it this time. His wife shot him in self-defence. (Shaw, 1905)

In Nanci L. Langford’s 1994 University of Alberta Department of Sociology thesis “First Generation and Lasting Impression: The Gendered Identities of Prairie Homestead Women”, I was very impacted by her research about the gender inequity of the day and the vulnerability of married homestead women in particular. If a pioneer woman’s husband was a good man, she still had isolation and discriminatory legislation to contend with. If her husband was bad, she was triply condemned.

Some men used violence and force to control their wives…Women found that when marital relationships broke down that they had no right of guardianship to their own children. And should she “misbehave” or try to run away, a woman could find herself committed to an asylum by her husband…In Alberta and Saskatchewan, women did not obtain rights to their own children until 1920, and only after campaigns to change the laws in both provinces were mounted by women, particularly farm women’s groups.” (Langford 1994)

Also opening April 25 is the concurrent group exhibit that I am curating at the Jackson Power Gallery titled The Memory Rooms, features the paintings, photographs, and installations of local artists Caitlin Richards, Patrick Arés-Pilon, and Mallory Gemmel, whose artworks are also history inspired. More on that soon.

2 thoughts on “The Sisterhood of Longing Part 2”